Do You Have to Supply the Other Party’s Insurance Company with a Recorded Statement? Auto Accidents, Injury Law 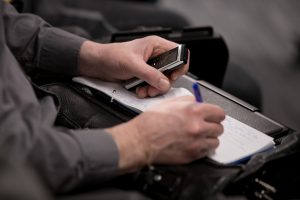 Interviewer: What happens if you’re getting calls from an insurance adjuster and they’re pressuring you and they say, “We need your statement now.We’ve got to have it.”? What can you do if you don’t have an attorney yet? Do you have to give them a statement?

If You Do Not Have an Attorney, You May Have to Comply

Rochford and Associates: If you’re going to try to settle your own case without an attorney, and the adjuster for the at-fault insurance company insists that he’s not going to discuss settlement unless you’ve give a recorded statement. If you’re not going to hire a lawyer, then you don’t have much of a choice.

After Retaining an Attorney, He or She Will Supervise Future Communications with the Other Party’s Insurance Company

I’m going to get the adjuster’s agreement that he’s going to send me the transcript and/or the recording of the interview. After within a week or two of the interview, he has to send that to me. He has to agree to that in the recording. Then he can then interview my client on the phone, with the speaker phone on so I’m hearing everything that’s going on.

Every once in a while I do allow a recorded interview with the at fault insurance company. There are various reasons. There may be a question as to liability and I may determine that it’s in my client’s best interest to allow the recorded interview. I may only allow my client to talk about the facts of the accident.

Interviewer: Right off the bat, you’re there to insulate and guard the person against making statements that will directly hurt their ability to collect damages?

Rochford and Associates: Yes. I am there to protect them from making statements or signing documents that are going to come back to harm them later on.

Are Some People Reluctant to Retain an Attorney because They Want to Avoid the Fees?

Interviewer: Let’s talk about what do you sense that people are worried about in regards to hiring a lawyer? Do you believe that they feel like, “Oh, if I hire a lawyer then I’m going to get less money than I otherwise would because I have to pay the attorney.”?

Rochford and Associates: Yes, I think that is completely accurate. I think that’s the primary concern with hiring a lawyer. People generally understand that injury lawyers usually take a case on a percentage of recovery. Most people cannot pay a lawyer an hourly rate of $300 or $400 an hour. The percentage may be a third of the total settlement. It can be 40%. It may be less.

They, in their mind, think, “Well, if I do this work, if I do this myself, I’m going to save money.” There have been studies conducted that have shown that that’s completely false. Even though a lawyer gets paid a third of the settlement or whatever percentage, traditionally an individual is able to get more money by having a lawyer than by not having a lawyer.

Now, one of the things that I can do it as that person’s lawyer, is I may be able to negotiate a reduced payment of the total bills. Or, if health insurance has paid some of the bills or there is medical payments coverage under the injured person’s own policy to pay some of the bills, we have to reimburse those companies for what they’ve paid out of settlement.

I can often negotiate get that amount reduced. Part of my fee goes to my ability and my experience in getting medical bills reduced, so my client ends up getting more money.

What Are Your Options If You Cannot Work While a Personal Injury Case Is Pending?

Top Misconceptions about a Personal Injury Case after an Auto Accident